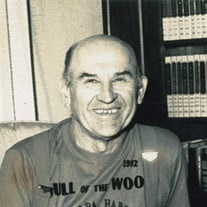 Walter F. Smith, 95, of Frances, Washington passed away at his family home surrounded by his loved ones on October 5, 2019. Walt was born to Polish Immigrants Frank and Ludwicka Szmul. Walt later changed his name to Smith because nobody could pronounce Szmul. Walt is survived by his loving wife of 32 years Irene, who survives at the family home. Walt is also survived by his children Mary Frost (Wayne) of Raymond, Walter (Gerry) of Australia, Bob (Kim) of Colville, WA, Sheldon (Patty) of Indianapolis, Shannon (Jim) of Raymond, Brent Dennis (Debra) of Beaverton, Oregon, Craig Dennis (Barbara) of Park city, Utah, Randy Dennis (Teresa) of Beaverton, Oregon, Julie Stroh (Ken) of Bonney Lake. Grandchildren include Caleb, Colten, Olivia (Mike), Shawn, Tonja (Brian), Emma (Wes), Bryan (April), Megan (Steven), Hannah (Saum), Eric (Stephanie), Ethan, Kyle, Brandon (Skyler) & Rylan and 10 great grandchildren. Walt landed his first logging job when he was 17 working for Weyerhaeuser. During his lifetime Walt worked not only for Weyerhaeuser but for McCorkle Brothers, Karnas Logging with his half brother Joe Paulis, and for Mallory Logging Company where he cut timber at Trap Creek, when he was employed by Les Wilson and Alexander Logging the crew traveled by boat from South Bend to the woods by Smith Creek and launched the vessel at the logging camp. For 10 years Walt worked with Jim Oatfield. Walt then was a co-owner and operator of Willapa Logging for 18 years before he retired. Donations may be made to the Willapa Harbor Helping hands, Elks Special Therapy programs, or to a charity of your choice. A service will be held at the Holy Family Catholic Church in Frances, 11 a.m. Mass and 10:45 Rosary on Saturday October 12, 2019. A Burial will follow at Fern Hill Cemetery in Menlo. To send flowers or a memorial gift to the family of Walter Frank Smith please visit our Sympathy Store.
To order memorial trees or send flowers to the family in memory of Walter Frank Smith, please visit our flower store.