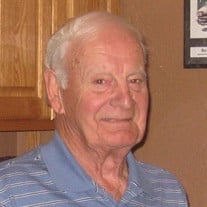 Robert (Bob) Inglin passed away peacefully at home on March 28th, 2021, surrounded by his loving wife and family. He was 94 years old. Bob was born on Jan 22nd 1927 in Aberdeen, WA to Elizabeth (Wiss) & George Inglin. He grew up in Aberdeen & attended St Mary’s Catholic school for 8 years and graduated from Weatherwax High School in 1944. Shortly after graduation he enlisted in the US Navy. After being honorably discharged from the service in 1946, he went to work as a carpenter’s apprentice. Bob met Irene Sienko in 1948 where they were both in the wedding party of his brother George and her aunt Josephine. They dated for several years, and after becoming engaged he decided to build a home for them. They were married at the Immaculate Conception church in Raymond on April 11, 1953 and moved into the house the following day. Bob was hired as a carpenter for Andy Johnson Construction where he worked for 25 years, eventually working his way up to foreman. He finished up his working career at the Pacific County Road Department where he worked for 13 years retiring in 1989. Bob enjoyed carpentry and built several homes for family and friends as well as many of the well know buildings in the surrounding communities. He never missed a chance to lend a hand and help others whenever it was needed. He liked to fish, hunt, and dig clams, even digging commercially in his younger years. Bob enjoyed getting together with family and friends and always had a joke to tell. His grandkids were often amused by his famous one-liners! The family looked forward to yearly summer camping trips and road trips to Disneyland where many memories were made. Bob and Irene loved to travel and enjoyed many cruises and trips including Mexico, the Caribbean, Hawaii, Las Vegas, Poland and Switzerland. They also treasured their yearly trips during the winter months to sunny Arizona. Bob was a devoted family man and always enjoyed attending his children and grandchildren’s many events. In reflection, his children remember a humble man with impeccable work ethic who taught by example with a selfless nature of putting others before himself. Bob was a member of the Raymond Elks Lodge, the American Legion, the VFW, the Polish Club of Aberdeen, and the Lewis Pacific Swiss Society. He was a devoted member of St. Lawrence Catholic Church and the Knights of Columbus. He drew strength and peace from his Catholic faith. Bob was proceeded in death by his parents, his older brother George, his sister Eunice, and a grandson Kyle. He is survived by his wife of 68 years, Irene, and 7 children; Connie (Joe) Chicano, Bob Jr. (Deborah), Sherry DiJulio, Mary Gibbons, Lindy (Peter Child), Kathy (Skip) Friese, and Heidi (Jamey) Friese; 18 grandchildren, and 8 great-grandchildren. The family would also like to acknowledge the countless hours of excellent care given by his caregivers Char and Brittney in his later years. A funeral mass will be held on Monday April 5th at 11:00, with rosary starting at 10:30. In lieu of flowers, the family requests that donations be made to St. Lawrence Catholic Church P.O.Box 31, Raymond, WA 98577 or the charity of your choice. Arrangements are in care of Stoller's Mortuary in Raymond, Washington. To send flowers or a memorial gift to the family of Robert Joseph Inglin please visit our Sympathy Store.
To order memorial trees or send flowers to the family in memory of Robert Joseph Inglin, please visit our flower store.