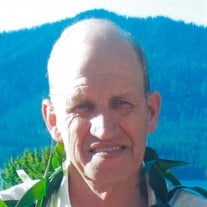 Paul Edward “Daddy Paul” Wampler, age 82, a longtime resident of Raymond, Washington, passed away at home on November 22, 2019. Paul was born on January 19, 1937 in Mayking, Kentucky to Charles Bruce and Letty Wampler. Paul met the love of his life, Rosa Collins, at church when they both were quite young. They were married on August 25, 1956 and cherished their 59 wonderful years together as husband and wife. He was a long-time member of Crossroads Assembly of God. For several years, he drove the church’s bus and provided transportation to children who needed a ride to Sunday school. Paul worked for Weyerhaeuser Lumber Mill for 42 years, retiring from the company in 2006. Paul enjoyed walking, taking care of his yard, and making his morning trek to McDonalds to grab a cup of coffee and resume his daily chat with his friends. He was an avid Seattle Seahawks’ fan. No matter how great the odds, Paul had an unshakeable confidence that they would come back and win. It was a sweet sweet moment when he and his gathered family jubilantly celebrated the Seahawks’ Super Bowl triumph in 2014. Paul truly cherished his family and always put family first in his life. Attending his grandchildren’s assorted activities and special milestone occasions invariably brought a warm and proud smile to Daddy Paul’s face. He also treasured the moments when the entire family would gather together, especially during the holidays. He was a kind, gentle man of impeccable character who faithfully lived a life that made a difference and left a legacy that shall forever be remembered and appreciated. Paul will be dearly missed by his grateful family and friends. Paul is survived by two brothers, Emmett Wampler of Wise, Virginia, and John Wampler of Wise, Virginia; two sisters, Helen Oris of LaFollette, Tennessee, and Ricki Hall of Newton, North Carolina; four daughters, Diane Hadi and husband, Kourosh, of Bothell, WA; Deborah Johnson and husband, Randall, of Bothell, WA; Paula Gonzalez and husband, Arturo, of Adna, WA; and Dreama Deskins and husband, Gary, of Toledo, WA. Other survivors include 10 grandchildren: Jeffrey Wampler and wife, Jill; David Johnson and wife, Taryn; Krystal Daw and husband, Jeffrey; Ali-Reza Hadi and wife, Rebecca; Saum Hadi and wife, Hannah; Leeda Hadi, Rachel Deskins and fiancée, Mitchell Davis; Matthew Deskins and wife, Allison; Michael Gonzalez, and Alanna Gonzalez; and 11 great-grandchildren: Caleb Daw, Katelyn Daw, Colin Daw, Elon Hadi, Aidan Deskins, Gavin Davis, Ashton Davis, Jordan Davis, Elijah Gonzalez, Ismael Idrissi, and Mila Gonzalez. Paul was preceded in death by his beloved wife, Rosa; his mother, father, two brothers and one sister. A celebration of Paul’s life was held at CrossRoads Assembly of God church on November 26, 2019. To send flowers or a memorial gift to the family of Paul Edward Wampler please visit our Sympathy Store.
To order memorial trees or send flowers to the family in memory of Paul Edward Wampler, please visit our flower store.