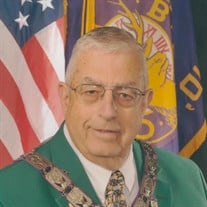 Larry Dale Topping was born on December 11, 1941, in Iola, Wisconsin, to Lloyd and Ruth (nee Peterson) Topping. In 1944, Larry's younger brother Roger was born, and the family later moved to Waupaca. After graduating from Waupaca High School, Larry joined the Navy and served in Japan on the Leonard F. Mason. He received an honorable discharge in 1964, and settled in California where he met Marianne Mierswa. They married in 1966, and in December of 1979, the family moved to Raymond, Washington, where Larry became a business owner. Though their marriage eventually ended, Larry and Marianne raised four wonderful children, Julie, John, Patrick, and Greg. In 1992, Larry met Barythe "Peggy" Long, a widow with three children, and in 1994 they were married. Larry and Peggy loved to travel and entertain friends. In the 28 years they were married, they visited many countries, traveled in their RV all over the United States, and Larry became "Dad" to Peggy's children. He was a trustee at the Raymond Elks Lodge for many years, and elected a Willapa Harbor Port Commissioner twice. Larry was a hard working, family-oriented man, who cherished his family and friends. He helped those in need, supported his local community and charities, and was known as an all-round good guy. His life was an example of integrity and caring, with a big dose of fun! He will forever be missed by his family and friends, but we are all so grateful to have had him in our lives. In addition to his wife Peggy, Larry is survived by his children, Julie (Robert) Foster, John (Trish), Patrick (Myrna), Greg (Jennifer), stepchildren Brent (Jennifer) Long, Jerry (Debbie) Long, and Valarie (Terry) Vontourne Setter, cousin Diana (Darrell) Sagert, his "little sister," and grandchildren Nathan, Eddy, Caleb, Katy, Christopher, Paige, Molly, Evan, Austin, Cameron, Dakota, Nicholas, Savanah, Olivia, Jessica, Sean, Joshua, Sam, and Parker. Funeral Services will be held at St. Lawrence Catholic Church in Raymond, Washington, on Monday, June 21, at 12 noon. In lieu of flowers, the family suggests donation to the Tall Elks project, Raymond Elks Lodge #1292, for the Tall Elks project. Arrangements are in care of Stoller’s Mortuary in Raymond, Washington. You may visit www.StollersMortuary.com to leave condolences for the family. To send flowers or a memorial gift to the family of Larry Dale Topping please visit our Sympathy Store.
To order memorial trees or send flowers to the family in memory of Larry Dale Topping, please visit our flower store.