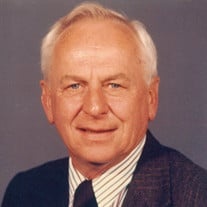 Kenneth Stanley Strozyk a long-time resident of McCleary, WA past away Tuesday November 12, 2019 at the age of 84 from a terminal stroke. He was a graduate of Willapa Valley High School class of 1953. Upon graduation he joined the US Navy where he served 4 years as a Personnelman Petty Officer 2nd Class. Upon his honorable discharge he returned to the Willapa Harbor area where he met the love of his life, Lou Ann Owens. Ken was a well-known clerk and manager for the Dennis Company Hardware Store in Raymond WA where he enjoyed assisting friends and customers for over 18 years. He later owned the Montesano Hardware Store for 4 years. He also enjoyed selling automobiles for Boone Ford in Olympia until his retirement in 2000. Ken was a member in good standing of the Lions Club, American Legion and St. Joseph's Catholic Church. He served one term as City Councilman for the City of McCleary WA. Ken is survived by his wife of 61 years Lou Ann and his children Kenneth L. (Janice), Terence J., Jerry W. (Yong) and Karen M. (Paul) LaDue. 8 grandchildren and 9 great grandchildren. He is also survived by his siblings Tony, Larry, Eugene, Charlie, Mary and Carolyn. He was preceded in death by brothers Vern, Frank, James, Ted and Steve. Funeral mass will be held at 11:00 a.m. Monday, November 18th at the St. Lawrence Catholic Church, with burial following at the Fern Hill Cemetery in Menlo. Following the burial, there will be a potluck lunch at St. Lawrence Church. In lieu of flowers donations may be made to a charity of your choice. To send flowers or a memorial gift to the family of Kenneth S Strozyk please visit our Sympathy Store.
To order memorial trees or send flowers to the family in memory of Kenneth S Strozyk, please visit our flower store.