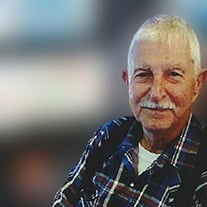 Jan Michael Fuss December 7, 1937 – November 23, 2020 On November 23, 2020 Jan Fuss spoke to his family from his home in PeEll, His final words, "I love you all, hey", he closed his eyes, and went to rest. Dad was born Dec 7, 1937 during the Great Depression, and never forgot those trying times. Soon after his birth his mother, Victoria, married Russel Niencziek who brought a son Gerald to the family. Jan and Gerald had two outstanding uncles, Victor and Paul Niemcziek, with whom they spent countless hours in the family forests and farmland of the Elk Prairie. These experiences created Jan’s life-long passion for working the land and love of the forests and great outdoors. As a child Jan excelled at basketball, and spent countless hours playing basketball with Gerald and his life-long friend, Skip Friese on the uneven floorboards of Friese’s barn. The smooth hardwood of a school gym was pure magic for Jan, making the varsity team as an eighth grader. He played point guard, averaging 22 points per game. There were no classifications for school sports in the 50's, so, in classic "Hoosier" style this team of eight skinny kids from Lebam played Castle Rock for the 1955 state championship. Jan was the definition of a self-made man. Fresh out of high school he built and operated a shake mill and owned the Lebam Post Office. The early shake mill days later paved the way to a career in logging. He soon bought a Ford six-wheeler that he loaded with an A-frame until he could afford a modern Bucyrus Erie shovel. Jan met and married Josie Karnas and raised two sons, Michael and Jan on an eighty-acre farm on a hill west of PeEll, WA. Jan continued in the industry and among the timber he loved by contract logging while buying timber properties of his own. By 1983 he had enough acreage to never step foot upon another man's land. Something he held to a personal high regard. From that day forward he lived by his own rules, he lived life the way that he wanted. He logged and planted a few acres every year, no more than necessary. A lot could be said about him about the way that he cared for his tree farm, a certain peace and solitude of heart. Nurturing the young trees and cutting firewood. When asked what he did for a living, Jan always answered, "I have two jobs, here and there!" Jan will be missed by family and friends, and those who saw him every day driving between Lebam and PeEll in his beloved Suzuki Samurai with a chainsaw and a row of firewood in the back seat. Jan is preceded in death by his mother Victoria Baggenstos, and brother Gerald Niemcziek. He is survived by Josie his wife of 53 years, sons Jan (Shari) Fuss of Chehalis, WA, Michael (Valerie) Fuss of Nampa, ID, grandchildren Jillian Fuss of UW Seattle, WA, Andrew Fuss of Meridian, ID, and Erin (Joe) Staples of Brooklyn, NY. Jan was interred to his final resting place at Fern Hill Cemetery in Menlo, WA on November 27, 2020. If you want to remember Jan, take a moment to plant and care for a tree, he would have loved to help you. Arrangements are in care of Stoller’s Mortuary in Raymond, Washington. You may visit www.StollersMortuary.com to leave condolences for the family. To send flowers or a memorial gift to the family of Jan Michael Fuss please visit our Sympathy Store.
To order memorial trees or send flowers to the family in memory of Jan Michael Fuss, please visit our flower store.