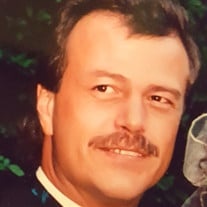 Jim Buchanan, a lifetime Raymond resident, passed peacefully at his home after a short bout of cancer. Born to father, Wesley Curt Buchanan (Mabel) and mother, Selma Newman Cardwell in Raymond, Washington in 1955. Jim married his wife, Debbie Buchanan, in 1993 and was employed by Weyerhaeuser for 40 years until retiring in 2016. He enjoyed spending his free time traveling with Debbie or attending golf tournaments with his buddies. He was a good athlete who not only loved to play, but also enjoyed watching sports. Jim had some honorary moments in his life… he participated in a marathon softball tournament in 1982 that set a World Record after 91 hours of continual play. He also played on the Raymond High School football team and helped the team earn their first ever state championship in 1973. Jim was a dedicated and loyal husband, son, father and employee and will be sorely missed by those who knew and loved him. He is preceded in death by his father Curt, brother Terry, and sister Debbie. Surviving Jim are his wife Debbie, mother Selma, Mabel, two brothers Mark Buchanan (Cindi) of Castle Rock, and Bruce Cardwell of Raymond, two sons Jesse (Michelle) of Raymond and Joel of Vancouver, and daughter Bobbie Johnston (Rob) of Puyallup. He is also survived by 4 grandchildren; Brittney, Brooke, Paige, and Braydon, and many aunts, uncles, nieces, nephews, and friends. All are welcome to attend a Celebration of Life at 1:00pm on Sunday Oct.,13th at the Raymond Eagles Lodge. Arrangements are in care of Stoller's Mortuary in Raymond. You may visit www.StollersMortuary.com to leave condolences for the family. To send flowers or a memorial gift to the family of James "Jim" Buchanan please visit our Sympathy Store.
To order memorial trees or send flowers to the family in memory of James "Jim" Buchanan, please visit our flower store.