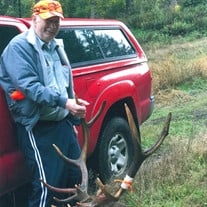 Edward “Ed” Langer died Tuesday, April 16, 2019 in Lacey, Washington; he was 83. He was born October 16, 1935 to Edward and Caroline (Muri) Langer in Raymond, Washington. Ed graduated from Valley High School in 1954, and went on to get an associates degree from Grays Harbor College. Throughout Ed’s life he worked as an installer for Western Electric, as a millworker for Weyerhaeuser, and retired from Hoquiam Plywood. He was an avid elk and deer hunter, a steelhead fisherman. Ed also was a tree farmer, a member of the Washington State Farm Forestry Association, a Lewis Pacific Swiss Society member, a member of the Marine Corps Association, member of the Willapa Harbor Gun Club, a lifetime member of the N.R.A., and a Marine Corp Veteran from the Korean War Era. Surviving Ed are his sister Carolyn Smaciarz of Menlo, his brother Jerry Langer of Menlo, his nephews Jeff (Gina) Langer of Menlo, Mike (Kelli) Langer of Rochester, Terry (Lana) Smaciarz of Menlo, and his Nieces Jonna (Mike) Hliboki of Hoquiam, and Jeri (Josh) Christen of Raymond. In lieu of flowers, donations may be made to the Willapa Valley School Scholarship Fund or a charity of your choice. Graveside Services are scheduled for 11:00 A.M. Monday, April 22, 2019 at the Fern Hill Cemetery in Menlo. Services are in care of Stoller’s Mortuary in Raymond, Washington. To send flowers or a memorial gift to the family of Edward "Ed" Langer please visit our Sympathy Store.
To order memorial trees or send flowers to the family in memory of Edward "Ed" Langer, please visit our flower store.