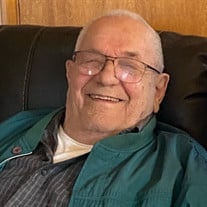 David Leonard Habersetzer passed away at home June 1, 2021. He was born April 9, 1931, the middle of the 5 children of Anna Helen Pilz and Leonard August Habersetzer. He graduated from Lebam High School in 1949 and joined the US Air Force in 1953. After a year of training, he was sent to Bremerhaven, Germany to serve in the 6913th radio squadron mobile (originally 41st RSM), from 1954 to 1956. As a radio operator, he intercepted and recorded Russian Morse code communications. Before his military service, he worked the family farm in Frances with his brothers, Carl and Gene. After coming home, he entered into a 40 year partnership with his brother Gene to form Habersetzer Brothers Dairy. In 1959, he met the new Pacific County extension agent, Margaret Ann Raupp, and proposed to her in 1960. They spent most of their engagement building the house they lived in for the next 52 years. David was a lifelong member of Holy Family Catholic Church, Farm Forestry Association, the American Legion, Veterans of Foreign Wars and the NRA. He also served many years as a volunteer firefighter for the Lebam Fire Department. David was preceded in death by his wife, parents, brothers and sister Nadine. He is survived by his seven children, Diane (Mike), Mark (Susi), Pam (Doug), Tammy (Mike), Daryl (Janine), Dean (Paulette), Wendy (Adam), his sister Carol, and 18 grandchildren. Memorials may be made to Holy Family Church, ℅ St. Lawrence/St. Joseph Parish, 1112 Blake Street, PO Box 31, Raymond, WA 98577. Services will be at Holy Family Catholic Church in Frances on Thursday June 10th. Rosary at 1:00 PM; Funeral Mass at 1:30 PM, followed by Burial at Holy Family Cemetery. A gathering will be held in the Holy Family Social hall immediately following services. Due to the small size of the church and hall and the current COVID guidelines, services will be limited to family and Holy Family Parish members only. Arrangements are in care of Stoller’s Mortuary in Raymond, Washington. You may visit www.StollersMortuary.com to leave condolences for the family. To send flowers or a memorial gift to the family of Dave Habersetzer please visit our Sympathy Store.
To order memorial trees or send flowers to the family in memory of Dave Habersetzer, please visit our flower store.