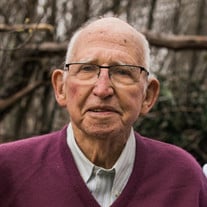 Laurence “Snake” Edward Bannish, 89, a longtime Willapa resident passed away on Monday, August 30, 2021, surrounded by his family. Laurence was born October 19, 1931, in Raymond, Washington, to Stanley and Elva (Pennington) Bannish. He attended Willapa Valley High School and graduated in 1949 as a proud Viking. He was an active member in his school participating in football, basketball, track,and band. In 1952 Laurence was drafted into the U.S. Army where he served in the Korean War for two years. He later married his lifelong partner Bonnie Jean Garrett on March 12, 1955, in Raymond, Washington. She preceded him in death in 2003. After returning from the service, Laurence worked at Weyerhaeuser and then theWillapa Valley School District where he retired with 30 years of service. He and Bonnie also worked for the Pacific County P.U.D. Laurence was very active in his community throughout his life: he was a member of the Willapa Valley Booster Club, Willapa United Methodist Church, Lebam Community Church, and V.F.W. 968. He also served on the Willapa Valley Water District Board. He was best known as “Grandpa Snake” throughout his community. He had a passion for cutting firewood and seemed happiest when he could start his morning off with a freshly cut load of wood. He could be seen taking care of his yard in Willapa while also helping many others in the neighborhood. He enjoyed hunting, fishing, clam digging, and picking wild blackberries. He loved watching his children, grandchildren, and great grandchildren participate in activities. He could always be found at football, volleyball, basketball, and baseball games. He enjoyed attending the State “B” Basketball tournament in Spokane where he watched his kids, grandkids, and other local athletes compete. Laurence made the family debut in the 1948 State “B” Tournament, with the Vikings bringing home the third place trophy. He is survived by his three sons, Jerry (Debbie) Bannish, Matt (Karen) Bannish, and Mark (Shelley) Bannish; two brothers, Lester Bannish and James Bannish;sister-in-law Linda Gunderson; six grandchildren, Laci Fourtner, Chris Bannish, Ricky Bannish, Jessica O’Brien, Kjersti Bannish and Abigail Bannish-Ratsavongsy; and seven great grandchildren, Brock, Kade, and Cole Bannish, Emma and Ella Fourtner, and Kyren and Colton O’Brien. Laurence will be greatly missed by his family and friends. A graveside service will be held on Friday, September 10, at 1:00 pm at the Fern Hill Cemetery in Menlo. In lieu of flowers, donations may be made to a charity of your choice. To send flowers or a memorial gift to the family of Laurence “Snake” Edwards Bannish please visit our Sympathy Store.
To order memorial trees or send flowers to the family in memory of Laurence “Snake” Edwards Bannish, please visit our flower store.